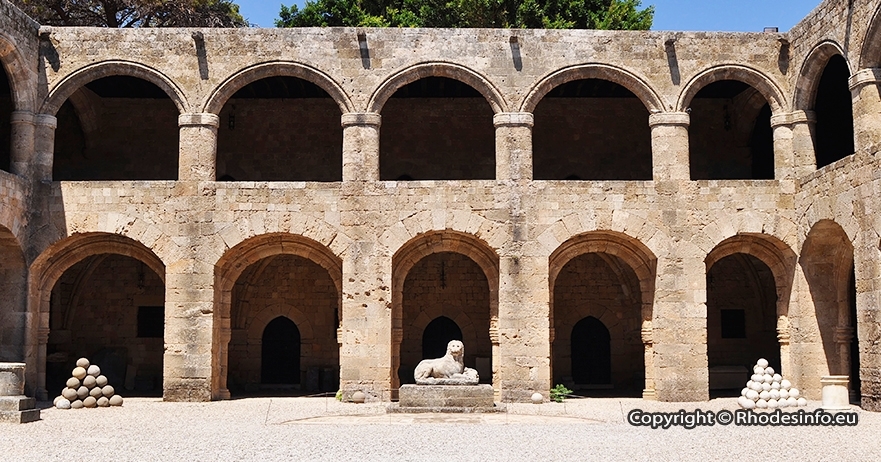 The permanent collection of the Archaeological Museum of Rhodes is composed of the Italian rule excavations mainly Rhodes and the other Dodecanese islands. Mycenaean jewelry, vases and small objects from burial ensembles of Ialyssos and Kamiros of the Geometric to the Classical period (9th-4th century BC), sculptures of Classical and Hellenistic periods and coins Rhodian Hellenistic are the main exhibits. The exhibition aims to highlight the major findings from Rhodes to help illustrate the ancient history of the place.

The Archaeological Museum is housed in the medieval building of the great hospital of the Knights.

According to the Ministry of. Culture its construction began in 1440 by Grand Master de Lastic (de Lastic), with money left by the death of his predecessor Fluvian (Flouvianos), but it was completed 49 years later by Master D 'Aubusson . This Gothic building with Renaissance elements. A pointed door is the entrance of the Museum covered with vaults. The building includes an interior courtyard flanked by two-story gallery, which opened in the halls and warehouses of the Museum.

In the courtyard, opposite the entrance, dominates a recumbent lion with a bull's head to his feet, from Late Hellenistic period and ahead it is exposed a mosaic floor of the basilica of Arkasa in Karpathos. A second inlay, also from Arkasa of Karpathos, is fitted in the inner courtyard, in front of the stores of the Museum, which has opened in the gallery of the ground floor. Upstairs are the large hall of the patients, the dining room and the halls of the archaeological collection. In the great hall of patients exposed sculpted tombstones of knights, chivalry badges and Roman sarcophagus used as a tomb of the Grand Master Kornegian. In the dining room are placed relief tombstones of Late Antiquity from Nissyros.

In the halls of the southern side of the portico samples out of Rhodian sculpture from the Archaic to the Roman period. The two kouros and perirrhanterion from Kamiros are the main exhibits of Archaic hall, which originally served as the hospital's kitchen knights. Below the room Timarista the headstone of critics and Timarista 5th century. BC by Kamiros and column Kalliaristas from Rhodes 4th century. BC. In the museum's garden sculptures have been exposed as the Niki's statue and carved columns Hellenistic period. In southern alcove of the atrium has been erected representation funerary chapel with trophy and coated floor mosaic from Arkasa of Karpathos. In the next three halls Hellenistic sculptures are presented, like Venus statue, oversized, the colossal head Sun, representative work of the Rhodian baroque statuette of Aphrodite, transformation of the famous work of Doidalsas, the Roman portrait of the poet of New Comedy Menander.

The fifteen rooms of the north and west side of the floor, burial sets (vases and small objects) from the 9th to the 4th century. BC, the Italian excavations in the necropolis of ancient Ialysos and Kamiros. In rooms 14 and 15 have been exposed black and red pottery of the 6th, 5th and 4th century. BC In room eight out jewelry Mycenaean period and treasure of silver coins Rhodian Hellenistic era.