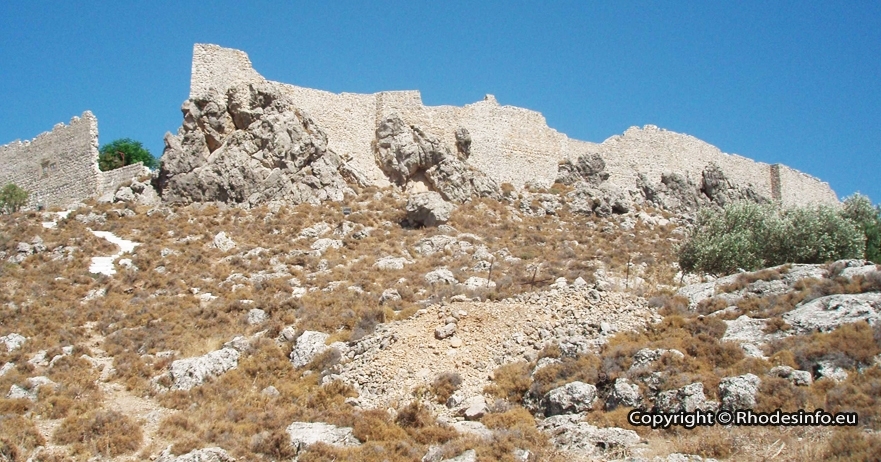 Originally built by grand master Jacques de Milly (1454-1461) on a rocky outcrop 216 metres high, above and to the east of the village of Archangelos and two kilometers from the east coast, it defended the village from coastal raids.

According to the Ministry of Culture it was repaired and improved by masters Pere Ramon Zacosta (1461-1467) and Giovanni Battista degli Orsini (1467-1476). It has an elongated triangular plan, covers an area of about 0.3 hectares and the circuit of the walls is 240 metres, with flanking folds at the corners. The gate is on the NW side, and within the walls are still visible the remnants of an older rectangular tower. Just north of the entrance was built the chapel of St. George, which was restored in the Italian period (1912-1943). A small round tower dominates the entrance and arms of masters Zacosta and Orsini are displayed on the walls, alongside those of the Order of st. John.

The castle is fairly well preserved. In the 15th century it was mentioned as one of the stronger castles in the countryside, meant to shelter the local inhabitants in case of danger. However, in 1457 an Ottoman raid on the village of Archangelos also resulted in severe damage to the castle and, in 1479, the villagers of Archangelos were directed to seek refuge at the neighbouring castle of Feraklos, which was presumably more suitable. In 1503 another Turkish raid was directed against the village, and the castle was once again seriously damaged.