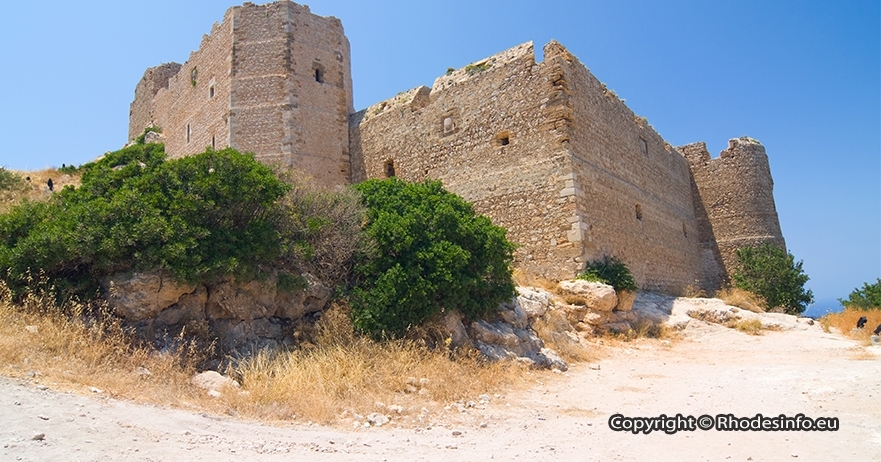 Independent fortress, the southernmost of the strong castles protecting the northwest coast of Rhodes, built on a hill dominating cape Kopria.

According to the Ministry of Culture the plan is roughly four-sided, covers a surface of 0.21 hectares, with a perimeter of 180 metres. The main gate is on the south side. On the walls are mounted the arms of four grand masters of the Order of St. John. The earliest part is a square watch-tower with the arms of Giovanni Battista degli Orsini (1467-1476). A key element is the polygonal flanking tower containing a gunnery with a chapel over it dedicated to St. Peter, constructed by Pierre d?Aubusson (1476-1503). The NE tower, dating from the reign of Fabrizio del Carretto (1513-1521),also preserves gunports in two levels. The neighbouring village of Kritinia and the castle are not mentioned in contemporary documents, although the castle may possibly be the 'castel nuovo' mentioned by G. Bosio in his history of the year 1480. The arms of another master, Emery d'Amboise (1503-1512) are to be seen on the outer curtain.

Thus the castle was receiving regular attention in the years 1480-1522; at the time it must have been a place of refuge in case of enemy raids for the inhabitants of nearby villages. It was an important relay station for alarm signals, receiving them from the islands of Chalki, Alimnia, Makre, Strongyle, Tragoussa and Symi. The castle also controlled the coastal road leading south on the west side of Rhodes. It was apparently abandoned after the Ottoman conquest.