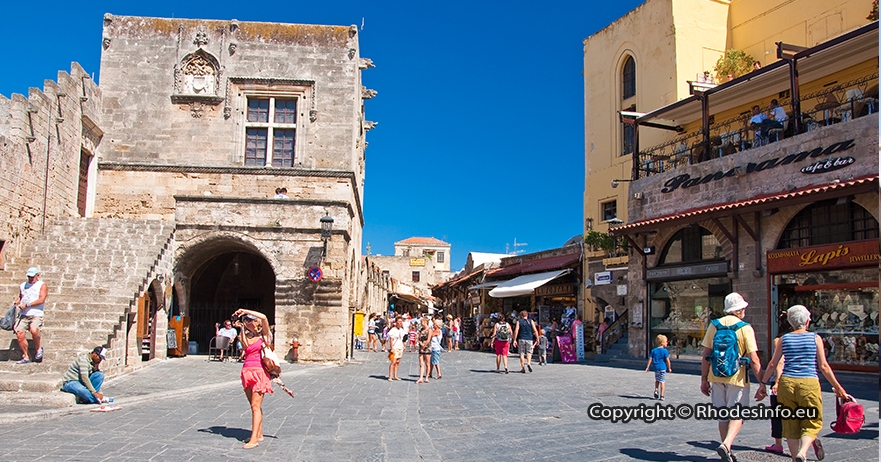 The Public Library of Rhodes is housed in one of the finest architectural monuments of the Knights of Rhodes, with elements of Renaissance style, the building of Castellania, located in Aristotelous Street in the northeastern tip of Hippocrates square in the medieval town of Rhodes.

After the earthquake of 1481 the Basilica Mercatorum (Royal Market) with the changes made by the Grand Master of the Knights 'D' Amboise and the adding floor, according to the prevailing opinion, operated as a public administration.
During the Turkish occupation, this historical monument was covered by makeshift buildings, which altered its physiognomy. In 1924 a big fire in the center of the Old Town market, became the reason to come again to light the building of Castellania.

The Italians, with architect Florestano Di Fausto, began restoration work that lasted ten years (1925-1935) and with demolishing the makeshift constructions, restore the building to its former luster. The building was subsequently used for university level lecture cycles, but also for propaganda purposes to promote the Annex in Rhodes Italian educational company, «Dante Alighieri».

After incorporation of Rhodes and the Dodecanese in Greece, in the building of Castellania housed the Public Library of Rhodes and the Historical and Folklore Archive of Dodecanese (1947).
With programmatic agreement between the Ministry of National Education and Religious Affairs, and the Office of the Medieval City of Rhodes City, in the building were extensive procedures for maintenance but mainly for the creation of the new reading room in the atrium of the Library.

The Public Library of Rhodes is already from the first years of its operation in 1947, a spiritual and cultural core of our prefecture. He was one of the first services founded by the then Military Commander Admiral Dodecanese Pericles Ioannides. With the no. 80 proclamation states: "founded in Rhodes Public Library, in order to provide to the inhabitants lights of Greek culture, which deliberately for many years, esterisen the conqueror."