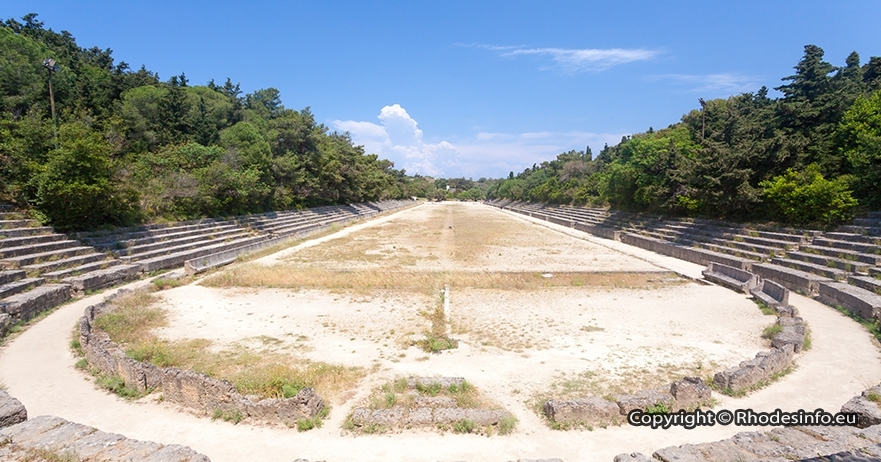 Acropolis of Rhodes is situated on the hill of Monte Smith (within New City of Rhodes), where there are preserved ruins, such as the three columns of the Temple of Apollon, protector of the city and also remains of the temples of Poliada Athena and Zeus.

The Acropolis was not used for defense and constituted a monumental zone with Sanctuaries, large temples, public buildings and underground cult places.

Excavations began by Italian archaeologists, and continued by the Second World War, bringing to light many findings. Acropolis has not yet been excavated to its fullest extent, while the restoration and maintenance of monuments of the area is still continuing.

The Rhodes Acropolis dominated the western and highest part of the city. It was not fortified like most ancient acropoleis. It consisted of a monumental zone with Sanctuaries, large temples, public buildings and underground cult places. The buildings were built on stepped terraces supported by strong retaining walls. It was "full of fields and groves", in the words of the 2nd c. AD orator Ailios Aristides. The style of the Hellenistic architecture on the Acropolis of Rhodes was perfectly conveyed by the combination of natural beauty and artificial transformations. The buildings on the Acropolis date to the Hellenistic and Late Hellenistic periods (3rd-2nd c. BC).

The excavations were carried out by the Italian Archaeological School during the Italian occupation of the island (1912-1945). From 1946 onwards the Greek Archaeological Service conducted excavations which added to our knowledge of the history and topography of the place. The whole of the Acropolis has not yet been excavated. An archaeological zone of 12,500 m² has been excluded from contemporary building with the intention of continuing excavation works to uncover the splendid ancient city of Rhodes.