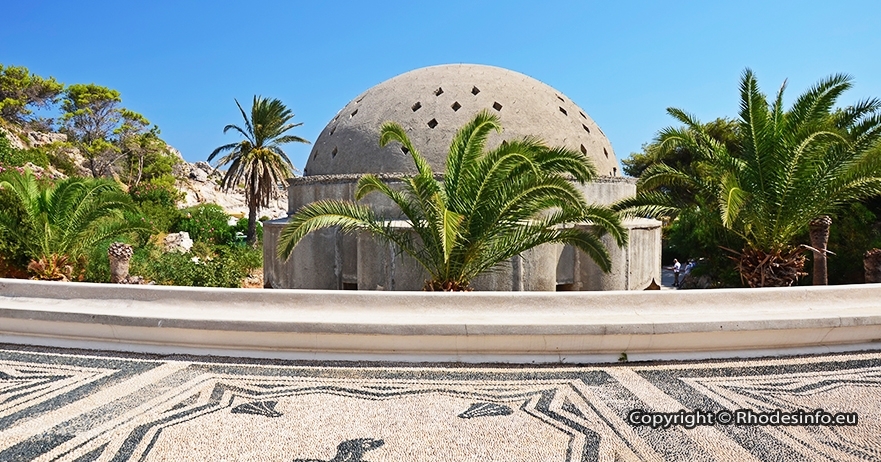 The springs of Kallithea are built in 1929 by an Italian architect called Pietro Lombardi. It is located in the eastern part of the island and attracts crowd of patients and scientists from around the world.

The water of Kallithea is considered to be therapeutic for many conditions. It is a building complex consisting of the circular square with a beautiful fountain, a semi-circular patio that was used for the distribution of water and the complex, which was used for sanitation.

Kalithea’s springs is an example of natural beauty, as you can admire everywhere gardens, parks, paved paths and more..

The hot springs of Kallithea at Rhodes is well known since ancient times for the beneficial health red water that gushes from the rocks. During the months of August and September, crowds regularly visited the area. Already since the Dorian sextet and that of the Knights, the miraculous healing spring became known and attracted world both from the surrounding islands and Asia Minor, and from the depths of Anatolia. It was a meeting place of Orthodox, Muslims and Jews. At this point of the island, known locally as "Tsilloneri" of the laxative properties of water, in 1927 -with the political initiative of Governor Mario Islands Lagko- began the systematic study of the waters. This was done by prominent hydrologists and physicians led by the famous Gustavo Gasperini. After his death, his son Carlo took over with the later director Aeneas Brounetti. In December 1928, began the direct construction of facilities designated basilicas to guarantee their perfect operation. The project was entrusted to Peregrine Lombardy and plans were ranked among the best architectural compositions of that time. The water Kallitheas adequate and therapeutics for diseases of arthritis, skin diseases, obesity, diabetes, tropical diseases, dysentery, malaria, allergies, asthma, cystitis, diarrhea and bowel disorders.