Cathedral Church of the Annunciation 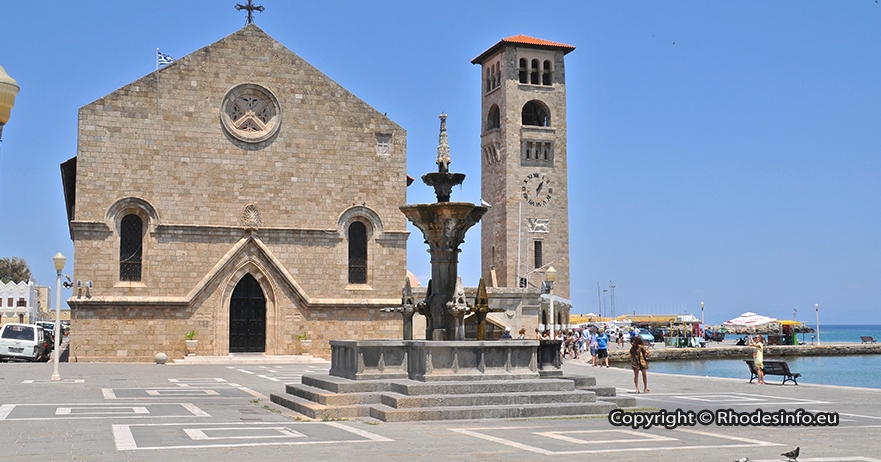 Former Catholic church of Agios Ioannis and now the Orthodox Cathedral of the Annunciation in Mandraki according to Metropolis of Rhodes is the reconstruction of the old monastery church of the Knights which was destroyed in 1856, the eruption of large amounts of gunpowder, forgotten in the basement of by chivalrous times.

In the early 1930s the architect Pietro Lojacono made excavations in the area where the old chivalrous Temple was. The hypothetical reconstruction of the Temple in Mandraki by Lojacono essentially based on engravings of Rottiers (1828), and secondarily in written sources, on the results of excavations and plans of Flandin (1853). An engraving of Rottiers The interior of the church with three naves be supported by four pillars on each side, some of them with ancient capitals and in the background the transept of the church and a chapel with vaults. As pointed out by the Lojacono area measuring plan forms a Latin cross. The widening of the presbytery and adding chapels date back to later periods.

The Lojacono analyzes in detail the stylistic elements combined in the ecclesiastical structure. "The largest Christian church of Rhodes should be considered as a separate type of church, harmoniously merge the elements of Gothic and Romanesque on the characteristics of individual style that originated in Syria under the rule of the Franks. The square arch is common in our gothic. This is often covered with bright dome on the cross vault. " The designer also claims that the characteristic roof-shaped keel (herringbone) "approaching this construction in the Italian Churches, especially the Veneto, including the Cathedral Aguileja and the Church of S. Zeno in Verona». The Lojacono fails to mention the most specific features of Church tradition architecture of the East "feature is also the system of rosettes"which are found in the pediments between the arched galleries and lighten the brackets. Similar architectural styles could be found in the East, and more specifically in Cyprus in the chapel of the monastery of St. Nicholas of the Cats in Akrotiri ... ". The most intense Syrian element in Agios Ioannis (Annunciation) is given by the gauge which, surrounding the arches of the side windows, turning the main analog front crowning the two windows of the façade to unite the entrance to the triangular projection of the cornice of the base, above which there is an arcuate window Catalan formula.

On the right side of the church portico was built to guard the sarcophagus of the Grand Masters which includes a square belfry with unmistakable Venetian influence both designed by Di Fausto. In the center of the triangular courtyard built a circular baptistery with drawings Petracco why an article of 22 October 1930 the newspaper Messaggero di Rodi says "harmoniously unites the smooth lines of the Gothic knightly style with majestic ring an Eastern style dome, supported eight ancient marble columns with equally ancient capitals decorated with floral motifs early Christian influence. The dome is suspended over eight rounded spirals, not based directly on the capitals, but by inserting beautiful baskets dug a recess, each framed by two spiral little columns that emphasize the sacred character of the building. The ends of the coil end with heraldic ornamental pattern votryos. The vault is made of cement, intermediate elements, such as the curb is of solid stone from the quarries of Koskinou, with a warm reddish patina. The circular basin of bluish marble comes from an old building in Kos, based on Byzantine capitals with acanthus leaves in relief. The interval between columns will closed from artistic wrought iron and crystal, work Boselli ». To weekly Sacra Rhodus comments: "A typical note particularly interesting and original is the flywheel of the elegant dome, which, rather than relying, as usual, over the arches, resting instead on stone gables with decorative motifs raised between the columns." The baptistery, with mosaic floors, was completed later with bronze statues anaparastoun the main and the theological virtues: Faith, Hope, and Charity are copies of works by Donatello (Baptistery of St. John, Siena), the other his student , Giovanni di Turino. The statues, cast from the company Lagana Naples, specialized in artistic reproductions, were placed in special preformed niches, and today kept in the Bishopric.

The church was given to the Orthodox Church after the Incorporation of the Dodecanese, was inaugurated by Bishop Timothy (Evangelinidi) and adapted internally to the needs of Orthodox worship. Painted during the reign of Bishop Spyridon of Rhodes hagiographers Foti Kontoglou and John Terzis and decorated with marble sculptures (temple, pontifical throne, shrines) of the brothers making. The narration lasted ten years, from 1951 to 1961.

Between 2006-2010 the church and the surrounding area were renovated and beautified.