The church of Agios Fragkiskos of Assisi 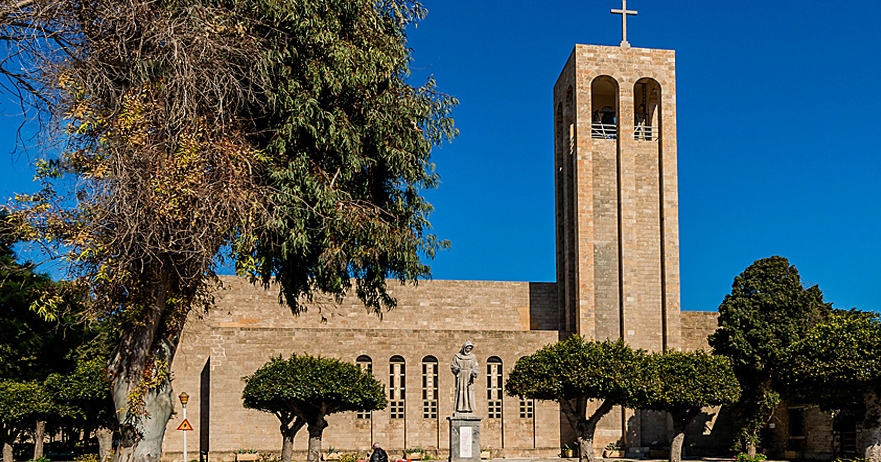 The church of Agios Fragkiskos of Assisi is the official Parish Church of the Latin Church in Rhodes. It is located near the gate of Agios Athanasios, between two regions of Akantia and Agios Ioannis. On Sundays and Feasts, Holy Mass conducted in Greek. Thanks to some volunteers, the faithful can follow the Mass in their native language through brochures with psalms translated into 12 different languages. After completion of each Liturgy, Father Luke along with other members of the Congregation, gathered in the hall behind the church or in the garden for a small celebration: some women, in turn, bring traditional sweets from their countries and good coffee for gang celebration.

On September 20, 1936, in the presence of the Archbishop and the Italian Governor Lago, the first stone of the temple was placed. The Church was designed by Arch Bernabiti, built by Engineer Vellini and was completed in 1939. The church is larger than Sancta Maria and became the Parish church of the Franciscans in Rhodes, which at that time hosted many Catholics.

The complex: the church, the belfry and the presbytery with the apse on the southeast side, the entire assembly is coated with rustic stones Coschino.
In front of the church there are three arches, which correspond to the three entrances.

The church has an architectural plan basilica with three naves with flat roof, a wing with two chapels at the ends and a semi-elliptic choir, which is illuminated by narrow windows. The side naves, which are lower and narrower, are separated from the main vestibule with columns. The naves end in chapels and each of them has six large windows with arches.

The walls of the choir are made by Pietro Gaudenzi, representing three important episodes from the life of St. Francis: the wonders of the spots in the center, preaching to the birds on the left and the miracle with the water on the right.

In the ceiling above the main altar is a cross, which is symmetrically surrounded by the symbols of the four Evangelists.

The side altars also designed by Gaudenzi, while representing the Annunciation and Agios Mauritius.
A local artisan has recently built an iron statue of Agios Fragkiskos, who currently is on the right side of the church: the statue surrounded by cloudberry bushes, palm trees and animals that attract children's attention.

In 1940 the Church also donated organ with 14 terracotta reliefs depicting the Via Crucis, and built by Monteleone.