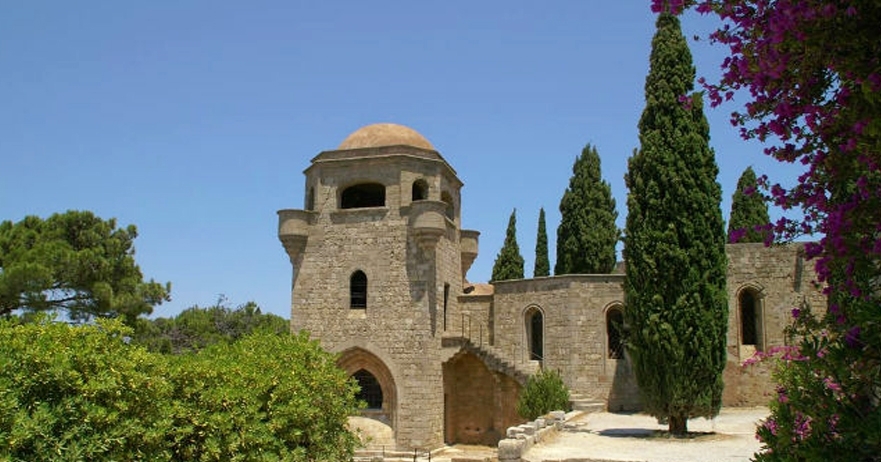 The mountain Filerimos rises south of the village Trianta (Ialissos) and 11 km. From Rhodes town, where there was acropolis of ancient times to the period of the Knights.

The Order of the Knights of Agios Ioannis turned the earlier Byzantine church into a church, which housed the Byzantine style icon of the Virgin, which was considered the work of the evangelist Luke. Enjoyed great honor and respect in Rhodes from the Orthodox and Catholics. Dated in the 11th to 12th century. and probably was part of representation of Deesis. It was miraculous and a document of 1497 stated that arrived in Rhodes, sailing up the waves at the time of the iconoclast Byzantine Emperor Leonta.

Also in 1496 the manuscript of Caoursin with engravings depicting M. Master Aubusson visiting the Monastery of Our Lady before the siege of 1480. After the conquest of Rhodes by the Turks (1522), moved to Malta and from there to Russia. Today it is at the National Museum of Cetinje Mavrovouni and a copy exists in the Church here.

It is obvious that the famous icon of Our Lady of Filerimos awarded Rhodes and the Aegean Sea, protected the Knights to their matches, helped the Order in Malta and was closely associated with the Tsarist of Russia.

During the Italian rule, the church was restored and operated as a communal monastery, adding igoumeneiou and cell.

Today the church operates every Sunday and celebrates Zoodochos Pigi. In the same area, at a lower level, there is a single-aisled church of Agios Georgios Hostos with frescoes of the 15th century. and out of the site, next to the park lie Byzantine ruins, dating back in the 10th century.

Around Filerimos area, archaeological excavations brought to light findings belonging to the Minoan and Mycenaean era, which confirms that the populating of Ialyssos is ongoing and dates back to the extreme this time.

There were found Mycenaean and ancient cemeteries with numerous tombs and rich findings, the most exposed in the Archaeological Museum of Rhodes.

On a plateau in Filerimos were scanty ruins of the acropolis of ancient Ialyssos. The area is fenced with stone fence and the entrance is from the east gate, where a wide stone staircase, with tall cypress trees right and left of us leads to the monastery of Panagia Filerimos, dedicated to Zoodochos Pigi, built by the Knights in place of an older Byzantine church and was rebuilt in its present form by Italian archaeologists.

On the east and the northwest corner of the hill is visible remnants of a Byzantine fortification with additions of the time of the Knights.

Right next to the cruciform baptistery is the Gothic stone restored church of Panagia Filerimos.

To the left of the main entrance of the archaeological site at a lower level from the monastery is the small subterranean Byzantine church of Saint George Hostos, 14th or 15th century AD

Opposite the entrance of the site and outside the fence begins the so-called Calvary, a stoned path with 14 etchings in a part, erected on pedestals, which represent the passion of Christ. The view from here is breathtaking. Pines, cypresses, oaks, olives everywhere, as there reaches the eye. A few meters below the hillside is partly restored fountain with six Doric columns and an equal number of pillars inside stso (4th century BC)

The Icon of Our Lady of Filerimos

The image of Our Lady of Filerimos is one of the important Christian relics.

It was considered to be work of Apostle and Evangelist Luke, but the story of the picture seems to start from the 11th century. The face of the Virgin is painted on canvas, which is then applied to the wood surface.

Many believe that the image comes from Jerusalem. Some historians argue that members of the Order of St. John brought her to Rhodes, the year 1000, where later took its nickname from the hill Filerimos and became the protector of the island. Others say that Agios Ioannis found her already on the island, after its conquest in the year 1309, and that the residents had already established it as their protector.

Although moved several times, the image stayed in Rhodes until 1523. Oral traditions and historical facts shows that defended the island of Rhodes by the numerous Turkish attacks. After the great attack and the final fall of Rhodes, according to Turkish sources, in 1522, the new ruler Suleiman the Magnificent, impressed by the courage of the Knights allowed them to take with them when leaving all their relics and religious objects. So the image started long course in history. First to Italy where he stayed there from 1523-1527, then to France from 1527 to 1530.

When the knights reached an agreement with Spanish King Karolo the 6th, the image was transferred to the island of Malta. Originally the Church of San Lorenzo (1530 - 1571), and then to La Valletta, in the church of Our Lady della Vittoria (1571 - 1578) and the Cathedral of San Giovanni (1578-1798). It is said that the picture was extremely great strength during her stay on the island of Malta, protecting it, especially during the great Turkish invasion in the year 1565.

When Napoleon conquered Malta in 1798, during the attacks of bandits in the palaces and churches, removed from them the cover. The image traveled through Trieste and arrived in Russia, where Tsar Paul A. greeted with honors. Then the image was placed a new gold cover, which was decorated with additional expensive jewelry like diamonds, rubies and sapphires. In the same workshops Tsar, similar decorations were used in two other relics. Hand of St. John the Baptist and a fragment of the True Cross. These two relics followed the image of Our Lady of Filerimos in turbulent way through history.

The image stayed in Russia until the revolution of 1917, when they hid in Moscow, St. Petersburg, and then through Estonia, in 1919 she was transferred to Copenhagen (Villa Di Vidor), to give the following Fiontorovna to Mary, mother Queen of Russia, which has managed to go to Denmark in 1917 after the October Revolution. The picture stayed there from 1919 to 1928.

By order of Maria Fiontorovna on the road to Belgrade, or according to some matters - on the road to the church of St. Panteleimon -in Russian monastery on Mount Athos, all three relics were moved soon to the Russian Orthodox Church in Berlin, where he stayed from 1928 until 1929.

The Royal Family Karatzortzevits kept the relics in the palace in Belgrade from 1929 to 1941. After the bombing of Belgrade on April 6, 1941, the relics were transferred to the Ostrog monastery, and remained there until 1952. Then the government took over the Montenegro and placed in the National Treasury.

In 1978 the government handed over the two relics in the Church and are now at Monastery of Cetinje, while the image delivered to the museum of Cetinje (currently kept in the National Museum of Montenegro).

Since 2002, the miraculous image of Our Lady of Filerimos remain in the Blue Chapel of the National Museum of Montenegro.

1480 The image temporarily transferred to the town of Rhodes during the Turkish invasion.

1490 - 1522 The picture remains the Castle of the Knights, to rebuild the Temple on the hill of Filerimos, after the invasion in 1480 and the earthquake in

1522 - 1523 Moves back to Rhodes town during the second Turkish invasion, and stored at churches of St. Catherine and St. Mark.

1523 The Image of Our Lady of Filerimos leaves forever the island of Rhodes to launch the great path through time and history.