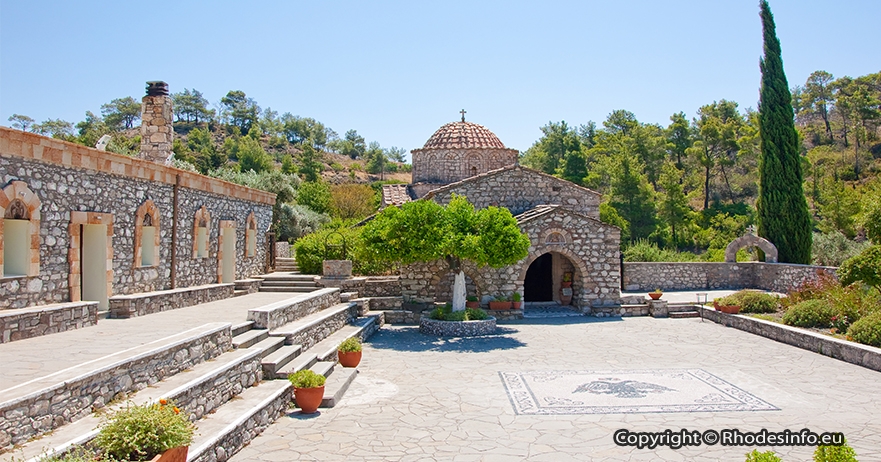 Inside the island, in a wonderful location, southwest of the village Laerma of Rhodes, in a wooded area is located the Monastery of Tharri. It is 64 km. away from the capital of the island and is one of the most important shrines of Rhodes. Its foundation dates back probably to the 12th century.

According to the Metropolis of Rhodes, regarding the etymology of the word Thar(r)i, there are different versions, of which three are the most prevalent: a) It's pre-Hellenic (eg Kamiros, Lindos, Ialyssos etc.) b) a conversion of the word stone (maintenance of expiring and penultimate) and c) comes from the courage imperative. The second interpretation is due to the existence of two prehistoric megalithic menhir type monuments dolmen, northwest of the monastery and located about one km.

According to tradition, the monastery was founded by the daughter of a Byzantine emperor, which was plagued by fatal illness and was healed miraculously. The ship that carried her from Constantinople, ran aground in the harbor of Lindos and from there, for unspecified reasons, moved to the area of ​​Thar(r)i. The spring water, that was there, and the clean air have contributed to her recovery. So he decided to found the monastery. An inscription of the year 1506, on the east side of the temple, An. Orlandos incorrectly read the phrase S[OTIROS] X[RICTOU] instead ETOUC X[RICTOU] and was led to believe that the Catholic until the early 16th century ., was dedicated to the Savior Christ. However from an inscription of 1624, seems to be a clear dedication to the Archangel Michael. Finally, the source, which is almost 100 m. Southwest of the Catholic, believed to be the same source, from Namata which healed the daughter of the emperor, and is considered holy water.

By inscription of the year 1473 the nave made known the name of the monk Gregory, the oldest known abbot of the monastery. After the death of Abbot Ignatius in 1916, the monastery was abandoned and revived only in 1989, when the igoumeneia undertook the Archimandrite. (Now New Zealand Metropolitan) Amfilohije Cuk. Then he restored the Catholic and existing buildings, and a short distance from the old monastery built complex of Commune with a temple in the name of St. Eleftherios.

From the Byzantine monastic complex survives only the Catholic, which follows the architectural type of free cross with a dome. All other buildings belonging to the post-Byzantine and modern times. The church suffered repeated interventions that altered the original form. Most of the dating to the late 12th or early 13th c., And some construction and painting residues reveal the existence of a much earlier temple wooden roof (probably the 8th-9th c.). In particular the major part of the sanctuary consists of two walls, an older, exterior, rather part of the wooden roof temple, and a younger, interior, part of the existing church. Among the discovered walls aniconic subjects, figures of saints and the composition of the Annunciation.

In the Catholic distinguished seven or eight paintings phases, which extend in time from the 8th or 9th to the 18th century.